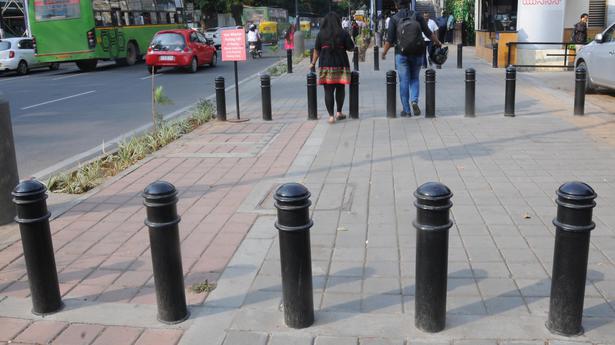 Any talk of better pedestrian pathways in Bengaluru invariably leads to TenderSURE roads — known for their wide and well-maintained footpaths. The network of 29 TenderSURE roads — totalling 32.7 km — and 32 roads developed under the Smart City project as per TenderSURE specifications — totalling 59 km — has definitely improved walkability in the central business district area.

However, is the TenderSURE model feasible to be replicated across the city is the moot question. “TenderSURE model, though costly, is worth replicating in wide arterial roads and shopping streets across the city. However, what is needed the most is restoring footpaths even on inner roads, without which commuters cannot make a trip on their feet. We need to ensure better contiguous footpaths from their homes to transport hubs such as Namma Metro stations and back to prompt people to make short walk trips. That is the challenge today,” a senior civic official said.

The city’s civic body and several urban activists believe that local decentralised planning by empowered ward committees is the way ahead. The Bruhat Bengaluru Mahanagara Palike (BBMP) allocated ₹60 lakh for every ward committee in 2021-22, of which ₹20 lakh was earmarked for footpath works, and this has been increased to ₹1 crore and ₹30 lakh, respectively, in the 2022-23 civic budget. The civic body aims to create 1,000 km of walkable footpaths every year under the initiative.

“Many ward committees have gone to the extent of passing resolutions in their meetings and getting to the stage of tenders for footpath works with the money allocated for 2021-22. The ward committees are able to make an informed choice and will be able to create walkable footpaths in the wards,” said Srinivas Alavilli, head, Civic Participation, Janaagraha Centre for Citizenship and Democracy.

Meanwhile, BBMP Chief Commissioner Tushar Giri Nath said the civic boday was also redeveloping footpaths on priority wherever they take up roadworks under the Nagarothana Scheme. “Developing a footpath doesn’t guarantee its use to pedestrians. We need to maintain it and ensure it is free of encroachments. I have asked civic officials to mercilessly remove encroachments on all footpaths that have been developed and are fit for pedestrian use. We will remove encroachments in phases as we develop those roads and footpaths,” he said.