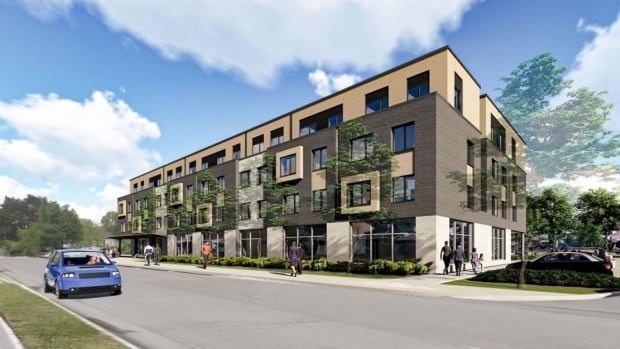 An Indigenous-led affordable housing project in East London slated to start construction this year will include some apartment units for mothers enrolled in post-secondary school.

The four-storey, 42-unit complex will be located at 18 Elm St. on the site of the former Holy Cross Elementary School, south of Trafalgar Street near Hamilton Road. The school was demolished early last year.

Units in the site will be two-, three-, and four-bedroom apartments offered at 80 per cent median market rent. The project is aimed at making a dent in the pressing need for housing among Indigenous people living in London, although residency will be open to non-Indigenous people as well.

"There's a need for safe, affordable spaces," said Cathy Connor, director of development for Ontario Aboriginal Housing Services (OAHS), the provincial organization partnering with the City of London on the $19-million project.

The complex will include a daycare and other on-site services for tenants, which Connor said will be crucial to helping residents. Mothers who live at the site will be part of the Homeward Bound Program, which helps provide support and housing as they retrain. The program is operating now and run by London's N'Amerind Friendship Centre, but Connor said its 12 clients aren't currently housed under one roof.

"The moms are scattered throughout the city, instead of being together where they can help to support each other," she said.

The city, through its former Housing Development Corporation, is contributing $1.5 million to cover the land purchase along with some design and construction costs. The rest of the project cost will be covered by the Ministry of Municipal Affairs & Housing and the CMHC.

Initial approval of the city's contribution is expected to come at a council committee meeting Tuesday. Connor said she expects construction to begin this year, with the facility opening in mid-2024.

A month after the start of the Russian invasion of Ukraine in February 2022, Hanna Trofimova said she had a deadly dilemma on her hands.

This is the third in a three-part series, The Real Cost of Electric Vehicles, diving into the future of electric vehicles and how electrification will impact Windsor-Essex. On the first day, we looked at affordability. On the second day, we looked at environmental impacts.

A city councillor wants Calgary to look at offering incentives to ATCO and other companies considering the development of solar farms inside city limits.

The city is trying to reassure a worried group of tenants in a Scarborough low-rise they they will not be homeless when a developer demolishes their building in a year or so.

Eyesore or gem? The fight to save Stratford's historic hospital from the wrecking ball

Preservationists are drawing a line in the sand in defence of Stratford's historic first hospital, demanding a reprieve for the yellow-brick Victorian building hospital administrators want to flatten to make way for new development.

UPEI medical school will come with its own staffing challenges, says Health P.E.I.

A medical school at the University of Prince Edward Island may eventually help to cure a doctor shortage in the province, but it won't come without some shorter-term challenges, a standing committee on health and social development heard Wednesday.

When storms raged during basketball practice in Cambridge Bay, Nunavut, Daisy Eyegetok always knew she couldn't take the day off.

Some First Nations chiefs are calling for a different type of workplace investigation to probe claims that the national chief of the Assembly of First Nations bullied and harassed staff — while others are urging the national advocacy organization to get back to business.

Regulating artificial intelligence: Things are about to get a lot more interesting

This column is an opinion by Jonah Prousky, a management consultant based in Toronto, focusing on data, analytics and artificial intelligence. For more information about CBC's Opinion section, please see the FAQ.

The holiday price freeze put in place by some of Canada's biggest grocery chains has hit its expiry date, so shoppers should brace themselves for news that could be hard to swallow: get ready for your food bill to go up. By a lot. Again.

An extreme cold warning is in effect for Toronto, with wind chills values of -30 expected Thursday night into Friday morning.

The Prince Edward Island government needs to do a better job of letting Islanders know what's going on than it did when there were problems with the 911 service Monday, says Green MLA Lynne Lund.

The city has drained a northwest pond as invasive fish have been dumped into it — something a spokesperson says is a widespread issue affecting the majority of Calgary's ponds.

A politician in Labrador says she's disappointed, but not surprised, that a long-promised sexual assault nurse examiner has yet to be put in place in the region.

Public Health Sudbury and Districts is advising residents in Espanola who get their water from the municipal system to monitor for signs of gastrointestinal symptoms, after a mechanical issue at the water treatment plant.

Nova Scotia regulators approved a 14 percent electricity rate hike Thursday, defying pressure from Premier Tim Houston who had called on them to reject the increase.

The Maritimes are no stranger to blasts of Arctic air during the months of January, February and into March. This is Canada, this is winter.

Outfitted in matching tracksuits, 18 Ukrainian kids' jaws dropped as they saw the rink at the Vidéotron Centre in Quebec City for the first time.

An attack left a male dead near a Main Street shelter in Winnipeg on Thursday morning — steps away from where a man was found dead inside a hotel on Sunday evening.

Honduran family that faced deportation in 2017 happily sworn in as Canadian citizens in Sask.

Environment Canada is cautioning Islanders about what could be the coldest night in decades on Friday.

Alberta has updated its Police Act, but the work to improve policing rules isn't done yet

The union representing RCMP emergency dispatchers across the country says there's an acute shortage of staff in British Columbia, which could worsen crisis responses.