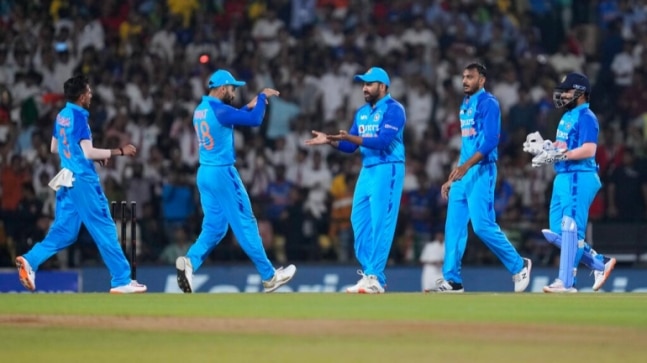 India have equalled Pakistan's record for most T20I wins in a calendar year after their victory over Australia on Friday. India have a chance to break the record on Sunday in the series decider.

India have equalled Pakistan's record of most T20I wins in a year after their six-wicket victory over Australia on Friday in Nagpur.

The match was a truncated one after there was a big delay due to a wet outfield and the game was reduced to just eight overs per side.

Having won the toss, India chose to bowl first and Aaron Finch got off to a flyer for the visitors. However, Axar Patel applied the brakes on the other side and the pressure led to the run out of Cameron Green first. The left-arm spinner then picked up the prize scalps of Glenn Maxwell and Tim David in quick succession.

Jasprit Bumrah picked up Finch to put the Aussies on the backfoot, but Matthew Wade continued his good form with a 20-ball 43 to power Australia to a strong total of 90 for the loss of five wickets in eight overs.

In response, India got off to a blistering start with Rohit Sharma leading from the front. The India skipper took the attack to the Australian bowlers, with Josh Hazelwood going for 21 runs in his first over. Adam Zampa came in to put the brakes on India's run chase as he wrecked the top order and picked up the wickets of KL Rahul, Virat Kohli and Suryakumar Yadav.

Hardik Pandya's stay at the crease was also short but Sharma kept on going as he pushed India towards the target. The skipper found some help from Dinesh Karthik who finished off the game in just two balls as India won the match by six wickets.

With the win, the Indian team went on to equal Pakistan's record of most T20I wins in a calendar year. Babar Azam and his men had 20 wins in 2021.

Mahmudullah didn't find a buyer in the Abu Dhabi T10 League players draft along with Afif Hossain Dhrubo, Tamim Iqbal and many other Bangladeshi cricketers.

Former Australia Test captain Tim Paine hasn't played any form of cricket since April 2021 due to his involvement in a sexting scandal with an ex-colleague.

Nepal captain Sandeep Lamichanne expressed his anguish, saying that he was physically and mentally affected after being accused of coercion of another person.

Dilhara Fernando was the star with the ball as Manipal Tigers registered a three-run win to get off the mark in the Legends League Cricket on Monday. A late blitz from the Pathan brothers wasn't enough for the Kings.

Sunil Gavaskar plays down concerns over KL Rahul's form in T20Is: He sacrificed his wicket for team

India vs South Africa: Batting great Sunil Gavaskar backed KL Rahul to come good at the T20 World Cup, saying the opener was willing to play according to the team's needs in the recently-concluded 3-match series against Australia.

India vs South Africa: All-rounder Shahbaz Ahmed and batter Shreyas Iyer have been included to India's squad for a 3-match T20I series, starting September 28 at home. India will miss the services of injured Deepak Hooda.

Harshal Patel can be more successful if he uses his pace: Salman Butt provides advice for struggling pacer

Salman Butt has advised struggling India pacer Harshal Patel to bank on his pace rather than depending on his slower balls. Patel's return to the Indian team against Australia didn't go to plan as he leaked a lot of runs.

Kapil Dev delivers his take on Deepti Sharma run out: Deprive batters of their run, better solution in my mind

Kapil Dev has delivered his verdict on the Deepti Sharma run out of Charlotte Dean and said that the better solution would be to deprive batters of the run. The run out of Dean has courted a lot of debate around the globe.

England's white-ball coach Matthew Mott has said that the management doesn't want to take a risk with Jos Buttler heading into the T20 World Cup. Buttler, despite being in Pakistan, hasn't taken part in any of the matches in the ongoing series.

Doubt Pant will get a look in: Saba Karim reflects on Karthik starting at number 6 spot

Former India wicket-keeper batter Saba Karim has weighed in on the Rishabh Pant-Dinesh Karthik debate for the number six spot. The 54-year-old doubts Pant will get a look in as Karthik seems to be the preferred option in that role.

South Africa are set to take part in a three-match T20I series against India before heading to Australia for the T20 World Cup 2022.

Former Australia cricketer Mark Waugh picked his top five players for the upcoming edition of the T20 World Cup to be played in October-November.

IND vs SA, 1st T20I: Rain played quite a bit of a part in the three-match series between India and Australia. Will it interrupt the first T20I of the upcoming series in Trivandrum?

David Warner and Mitchell Marsh have returned to the Australia squad for the two-match T20I series against West Indies, beginning October 5. Cameron Green and Tim David have been retained after their brilliant performances in the T20I series against India.

Bhilwara Kings returned to winning ways as they thrashed Gujarat Giants by 57 runs on Tuesday in the Legends League Cricket. Chris Gayle's debut for the Giants didn't go as plan as he failed to impress.

India captain Rohit Sharma and the Indian team received a grand welcome by Kerala fans ahead of their match against South Africa. Team India will face the Proteas in the first match of the three-game T20I series in Thiruvananthapuram.

India's batting coach Vikram Rathour has cited dew as a negative factor in India's performances while chasing targets in the recently concluded Asia Cup. Rathour also mentioned that the team is working on improving their ability to defend targets.

It is too late for Harry Maguire to save his Manchester United career: Jamie Carragher

Jamie Carragher has claimed that it is too late for Harry Maguire to save his Manchester United career and the defender should move on from the club after this season. Maguire hasn't been the first choice defender for Erik ten Hag this season.

Mithali Rajj has penned an emotional farewell message to Jhulan Goswami after the India pacer retired from international cricket. Raj said that the Indian team jersey would miss Goswami.

IND A vs NZ A: Sanju Samson hits fifty as India A clean sweep New Zealand A in one-day series

Mark Taylor has urged the Australian selectors to resist calls for taking Cameron Green into the T20 World Cup squad despite his exploits in India. Green excelled during the recently-concluded T20I series against India.

In a major boost to Gujarat Giants, the Universe Boss Chris Gayle will be available for their Legends League Cricket match at the Barabati Stadium in Cuttack.

Virat Kohli’s batting has improved from Asia Cup, he is trusting his power game: Sanjay Manjrekar

Virat Kohli scored 63 off 48 balls against Australia on Sunday at Rajiv Gandhi International Stadium and helped India win the match by six wickets.