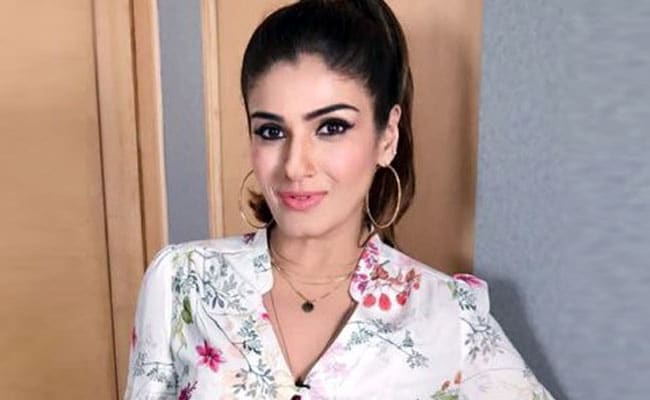 Apart from Ms Raveena and MM Keeravani, Tabla maestro Zakir Hussain and singer Vani Jairam have been honoured with the Padma Vibhushan and the Padma Bhushan, respectively.

Actress Raveena Tandon is on cloud nine as she has been conferred with Padma Shri Award.

Ahead of India's 74th Republic Day, the Government of India, on Wednesday, released a list of the Padma awardees. Ms Raveena along with RRR's music composer MM Keeravani will receive the prestigious award later in the year.

Ms Raveena reacted to the news with words filled with gratitude. She dedicates this award to her late father Ravi Tandon.

She said, "(I am) Honoured and grateful. Thank you so much, Government of India, for acknowledging my contributions, my life, my passion and purpose - cinema and the arts, that allowed me to contribute, not only to the film industry, but also beyond. I thank all those who guided me through this journey of Art and Craft of Cinema - all those who held my hand through it, and all those who watched me from their place above.I owe this to my father."

The minister said that research and studies on the potential and emerging threats from space debris are carried out by ISRO and academia since the early 1990s.

A few days ago, sand was found in sacks of government-procured paddy sent to a warehouse by a women SHG in Nagod area of the same district.

Urge Australia To Not Allow Anti-India Activities On Its Territory: Centre

Two people were injured when a fight broke out between "Khalistani group" and pro-India demonstrators in Melbourne on Monday.

Kiren Rijiju said that the appointment of Judges and Judicial Officers falls within the domain of the High Courts and State Governments concerned.

Those Who Have Eaten Beef Can Be "Brought Back To Hinduism": RSS Leader

RSS leader Dattatreya Hosabale further said that we can't close our doors on those who have converted to other religions.

As of January 30, a total of 235 affected families have been distributed Rs 3.50 crores as relief assistance, minister Jitendra Singh said.

The lone Congress MLA in the poll-bound states is a party heavyweight from Tripura Sudip Roy Barman.

Supreme Court To Celebrate Its Anniversary For First Time

Supreme Court To Celebrate Its Foundation Day For First Time

Scheduled Caste Haryana Government Employees To Get Quota In Promotion

Families belonging to Scheduled Castes who wish to set up small and micro industries will now get 20 per cent discount on purchase of land, the chief minister also said.

A prominent name not just in Telugu cinema but also in Tamil and Hindi films, he became the 48th recipient of the Dadasaheb Phalke award, the highest recognition in Indian cinema.

In their appeal to the top court, they have sought a direction to restrain the centre from curbing their right to "receive and disseminate information" on the two-part BBC series called "India: The Modi Question"

Foreign countries including Brazil, India, Thailand, Russia, Mexico, as well as the European Union, have subsidised artificially cheap sugar on the global market at the expense of the American sugar industry.

Covid Live: The active cases have also declined to 1,763, according to the Union Health Ministry data.

Letter To Sonia Gandhi In My Name Fake: Siddaramaiah

The letter in question was address to AICC chairperson Sonia Gandhi saying that the differences over tickets would lead to rebellion in the party ranks.

TDP Mandal level leader, Venna Balakoti Reddy was sleeping at his residence in Alavala village in Rompicherla Mandal, when the assailants fired two rounds at him at midnight.

The former chief minister, spearheading a campaign against liquor consumption in the BJP-ruled state, maintained the government should not cash in on the habit of drinking.

Once the five take oath as judges of the top court, its working strength will go up to 32.

Centre Has "No Role" In Fixing Minimum Working Days For Courts: Minister

The central government has no role in fixing the minimum number of compulsory working hours and working days for courts, the minister said.

"The Delhi government has already provided training to more than 1000 principals/teachers from abroad and further wants to continue it," Arvind Kejriwal added.

"World Bank Can't Interpret It For Us": India On Indus Water Treaty

Paresh Rawal, a BJP leader, moved the high court seeking quashing of the FIR against him and a notice by the police to appear before it on February 4