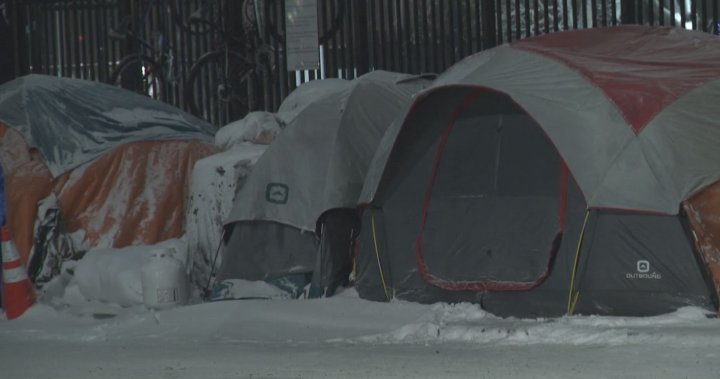 Calgary homeless advocates and those who serve the city’s vulnerable population are concerned about the effects of staying outside in -20 C weather.

With weather getting numbingly cold in Calgary, homeless advocates and those who serve the city’s vulnerable population are concerned about the effects of staying outside in minus-20 C weather.

“As soon as those temperatures drop, especially the sub -10, -15 temperatures start to set in, just being stationary for a few minutes and not having the blood circulating can lead to frostbite in minutes,” Drop-In Centre program supervisor Chris Kavanagh said. “It can lead to massive problems, including amputations and some very serious infections.”

Kavanagh recalls seeing one man whose time on the streets in cold weather led to a number of consequences.

“It was an image that’s probably going to stick in my mind forever,” he said.

“There was one gentleman who had had a number of his toes amputated and was in real serious pain and constantly being monitored for infection. And it’s something that’s really impactful on our staff because it will affect the quality of this person’s life forever.”

Daily low temperatures are forecast to dip below -20 all week. Friday’s mercury is forecast to hit -25 C. With wind chill, conditions could feel even colder.

“We are anticipating a need, especially for winter clothing, unlike we have ever seen before, because we do have a lot of refugees and newcomers who are struggling and will be experiencing their very first winter here. And the demand for our clothing program has exploded over the last several months,” Kavanagh said.

The Drop-In isn’t the only organization in the city trying to get cold weather gear to those in need.

Hamilton extends encampment response pilot until the end of April

A pilot program enlisting an encampment response team, providing outreach services and bylaw enforcement, was extend after the initiative expired at the end of 2022.

GO Transit and UP Express train riders now have the ability to text Metrolinx amid any safety concerns on their commute, dispatching support if needed.

Controversial former Mount Royal University professor Frances Widdowson was getting set to speak at the University of Lethbridge, but protesters took over the space.

The sign, in the northeast community of Bridgeland, has taken a couple hits over the last year which has resulted in two missing letters.

While an action plan will be unveiled by early spring, legislation to guide its implementation won't come for some time after, Natural Resources Minister Jonathan Wilkinson said.

Nestle to chop, slice and freeze sales of Delissio, Lean Cuisine in Canada

Nestlé Canada stated that the company does not have a factory in Canada that manufactures any of its frozen meals or pizza products.

The inquiry, announced late last year, comes in response to a complaint filed by the environmental law firm Ecojustice on behalf of eight environmental groups.

Officials said a child was playing in a tunnel that had been dug out in a snowbank by the side of the road while snow-clearing operations were underway.

The City of Vernon says they've experienced a steady decline in donations given through the Kindness Meter program that began in 2016 but hopes things will change.

According to the Canadian Western Agribition, nearly $100 million was generated in economic activity in 2022 after last year’s Agribition.

A ceremony for Black History Month in London, Ont., to be held at Museum London Saturday from 1 p.m. to 4 p.m. is set to feature a variety of performances and is open to everyone.

A federal court judge says that a man in Ontario was not entitled to receive Employment Insurance benefits after losing his job for refusing COVID-19 vaccination and testing.

The army says reserve personnel from 31 Service Battalion and 23 Support Company will conduct driving training between Hamilton, Ottawa and Petawawa from Feb. 3 to 5.

Environment Canada issued an extreme cold warning for a large swath of the province, including Montreal. The frigid temperatures are set to roll in throughout the day.

A New Brunswick parent group is welcoming a statement by the premier that the government's proposed reform to the French immersion program in schools isn't a sure thing.

Nova Scotia's utility regulator has defied the provincial government and approved an average 14 per cent increase in electricity rates over two years.