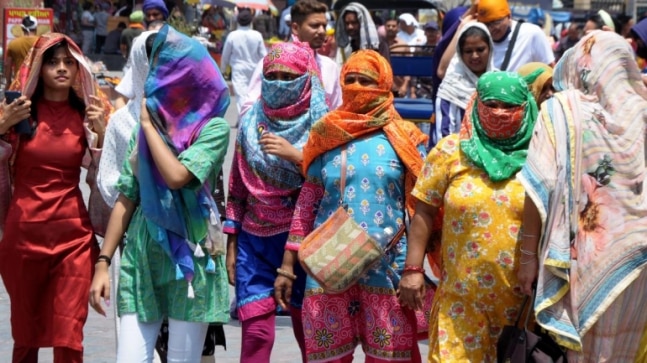 Searing heatwave gripped North India as temperatures crossed 45 degrees Celsius in many parts, while pockets of Delhi saw an upwards of 47 degrees Celsius, with little relief expected in the next couple of days.

Heatwave conditions will continue to prevail over northwest and central parts of the country during the next two days and will reduce thereafter, said the India Meteorological Department (IMD).

The IMD also issued an orange alert for heatwave in Delhi on Sunday, predicting that the mercury may soar to 46-47 degrees Celsius. As per the weather officials, the heatwave spell is likely to worsen on Sunday.

While Jammu recorded the season's hottest day at 43.5 degrees Celsius, a red alert has been sounded for several districts of Rajasthan where Dholpur turned into a hot cauldron on Saturday with the mercury rising to 48.5 degrees Celsius.

In Punjab, Bathinda recorded its maximum at 46 degrees Celsius while Amritsar, Ludhiana, Patiala, Pathankot and Gurdaspur recorded their respective maximums of 45.6, 45, 44, 43.8 and 43.5 degrees Celsius.

Meanwhile, Mrutyunjay Mohapatra, Director General of Meteorology, IMD, said, "Heatwave will gradually decrease from May 16 onwards. On the night of May 15, there'll be a western disturbance in northwest India."