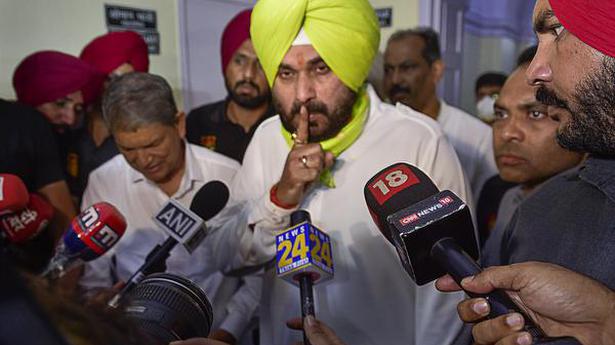 Signalling his intention to continue as the president of the Punjab Pradesh Congress Committee (PPCC), Navjot Singh Sidhu on Thursday said he had of Congress president Sonia Gandhi as well as former party chief Rahul Gandhi and general secretary Priyanka Gandhi Vadra.

He made these remarks after meeting All India Congress Committee's (AICC) Punjab in-charge, Harish Rawat and general secretary (organization) K.C. Venugopal, at the AICC headquarters in New Delhi.

Myanmar skips ASEAN summit after its military ruler shut out

The talks will be joined by other world leaders including U.S. President Joe Biden and the leaders of China and Russia, and are expected to spotlight Myanmar’s worsening crisis, as well as regional security and economic issues

At least six civilians were injured in a grenade attack by terrorists in Bandipora district of Jammu and Kashmir on Tuesday, police said. &quot;At about 10:20 am, terrorists hurled a grenade upon the

Mr. Wankhede in his affidavit submitted to a Mumbai court claimed he was under a "lurking threat of arrest as it does not suit some vested interests for conducting an honest and impartial investigation".

Supreme Court to pass orders on October 27 in Pegasus case

Protesters called for a mass march Saturday to press demands for a return to civilian rule.

The camp will be mostly for those requiring Covishield doses

The woman complainant had alleged that he raped her on the pretext of marrying her, police officials said