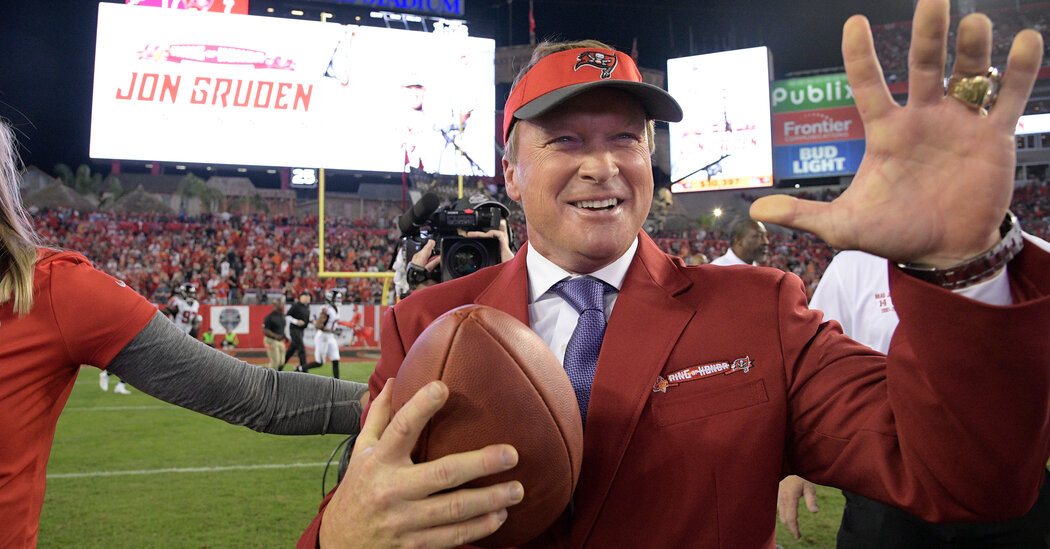 The Tampa Bay Buccaneers, whom he coached to a Super Bowl win, have removed him from their Ring of Honor, and a shoe company and a popular video game no longer want his endorsement.

The damage to Jon Gruden’s legacy has radiated beyond the loss of his job as coach of the Las Vegas Raiders and the widespread denunciation of comments that were homophobic, misogynistic and racist. The revelation that Gruden denigrated people around the N.F.L. has tarnished long-held relationships, quashed a couple of sponsorship deals, including one with the popular Madden NFL video game, and plunged him into disrepute with the organization he delivered a Super Bowl title.

Gruden has not spoken publicly since his statement announcing his resignation on Monday night, hours after The New York Times reported that N.F.L. officials had discovered, amid a workplace misconduct investigation into the Washington Football Team that did not directly involve him, that he had casually and regularly disparaged people throughout the league in bigoted terms. That report came three days after The Wall Street Journal first reported Gruden had sent a message in which he denigrated DeMaurice Smith, the executive director of the N.F.L. Players Association, who is Black, with a racist trope.

The N.F.L.P.A. and the Fritz Pollard Alliance, which is dedicated to improving diversity in the N.F.L., condemned Gruden’s remarks, unlike the Raiders, who in their statement Monday night merely said that owner Mark Davis had accepted his resignation. On Wednesday, General Manager Mike Mayock emphasized to reporters that Davis’s late father, Al Davis, had employed, at various times, the league’s highest-ranking woman, Amy Trask; the first African American coach in the modern era, Art Shell; and one of the league’s first Hispanic coaches, Tom Flores.

In Battle of Rivals, the Dodgers Outlast the Giants to Reach the N.L.C.S.

A late single by Cody Bellinger was the difference in a hard-fought pitching matchup between 109-win teams.

Jeff Pash, the league’s general counsel, brokered penalties, discussed a cheerleading scandal and received perks in emails with the former president of the Washington Football Team.

Denny Doyle is concerned about the risk of brain injuries to children who play tackle football. And he worries that his beloved church will also pay a price.

Cowboys’ Trevon Diggs Is Among the N.F.L.’s Breakout Stars

Diggs, with his league-leading six interceptions, and emergent talents like Atlanta’s Cordarrelle Patterson and Arizona’s Rondale Moore have surprised opponents.

Gruden, Already Out of a Job, Is Losing Relationships Too

The Tampa Bay Buccaneers, whom he coached to a Super Bowl win, have removed him from their Ring of Honor, and a shoe company and a popular video game no longer want his endorsement.

The Dodgers Stay Alive, Forcing a Game 5 That Felt Inevitable

“This is what baseball wants,” Dodgers Manager Dave Roberts said after his team beat the Giants, 7-2, forcing a winner-take-all game in this division series between rivals.

The N.F.L.’s Hypocrisy Was on Full Display in Gruden’s Emails

As the league is trying to send a signal about inclusion and diversity, hate-filled correspondence between football power brokers reveals entrenched values.

Sky forward Kahleah Copper’s hot shooting against the Mercury in Game 3 of the W.N.B.A. finals has the team one win away from its first title.

Houston’s Shortstop Was Right on Time With Go-Ahead Homer

Carlos Correa’s mammoth home run, and over-the-top celebration, gave the Astros a strong start to a battle of pitching-starved teams.

Carlos Correa Is OK With Being the Heel

The Houston Astros shortstop is a vocal leader on the field and happy to be the team’s spokesman off it, even when it comes to discussing the team’s scandalous past.

Why Are the Boston Red Sox Singing ‘Dancing on My Own’?

A dance club anthem has become the unexpected soundtrack of a red-hot team. Credit (or blame) goes to a backup catcher.

Just Like Their Manager, the Red Sox Keep Coming Back

Alex Cora spent a season in exile, and the Boston Red Sox sank to the A.L. East basement. With their manager back, the resilient Red Sox are in the A.LC.S. These things are related.

For the Giants, a Rapid Ascent, a Hard Fall and Hopes of a Rematch

San Francisco had a 109-win season dissolve at the hands of a bitter rival, but they still view their future as bright. “This won’t be the last time we play them in the playoffs.”