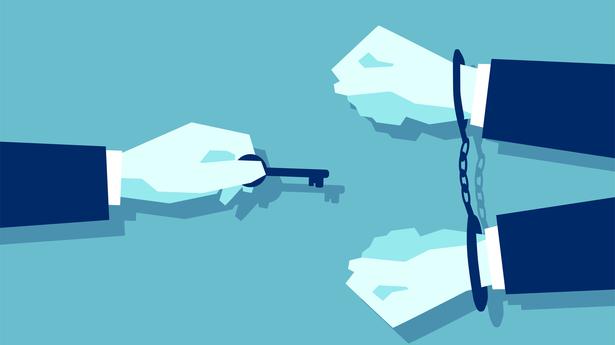 How do pardon powers of the President and Governor differ from government’s jurisdiction to release convicts?

The story so far: The Supreme Court has reserved orders on the question whether a Governor can refer the State government’s advice for granting remission to life convicts to the President for a decision. The court is examining a petition from A.G. Perarivalan, one of the life convicts in the Rajiv Gandhi assassination case, questioning the delay in his release even after the Tamil Nadu government, in 2018, recommended the release of all seven convicts in the case under Article 161 of the Constitution. The Governor, instead of acting on the recommendation, referred it to the President. In the course of the arguments, the Additional Solicitor-General of India K.M. Nataraj contended that only the President, under Article 72 of the Constitution, could consider a claim for pardon or remission, and not the State Governor, if the offence involved was based on a parliamentary law.

Both the President and the Governor have been vested with sovereign power of pardon by the Constitution, commonly referred to as mercy or clemency power. Under Article 72, the President can grant pardons, reprieves, respites or remissions of punishment or suspend, remit or commute the sentence of any person convicted of any offence in all cases where the punishment or sentence is by a court-martial, in all cases where the punishment or sentence is for an offence under any law relating to the Union government’s executive power, and in all cases of death sentences. It is also made clear that the President’s power will not in any way affect a Governor’s power to commute a death sentence.

Under Article 161, a Governor can grant pardons, reprieves, respites or remissions of punishment, or suspend, remit or commute the sentence of anyone convicted under any law on a matter which comes under the State’s executive power.

The Code of Criminal Procedure (CrPC) provides for remission of prison sentences, which means the whole or a part of the sentence may be cancelled. Under Section 432, the ‘appropriate government’ may suspend or remit a sentence, in whole or in part, with or without conditions. This power is available to State governments so that they may order the release of prisoners before they complete their prison terms. Under Section 433, any sentence may be commuted to a lesser one by the appropriate government. However, Section 435 says that if the prisoner had been sentenced in a case investigated by the CBI, or any agency that probed the offence under a Central Act, the State government can order such release only in consultation with the Central government.

In the case of death sentences, the Central government may also concurrently exercise the same power as the State governments to remit or suspend the sentence.

Even though they appear similar, the power of remission under the CrPC is different from the constitutional power enjoyed by the President and the Governor. Under the CrPC, the government acts by itself. Under Article 72 and Article 161, the respective governments advise the President/Governor to suspend, remit or commute sentences. Despite the fact that it is ultimately the decision of the government in either case, the Supreme Court has made it clear that the two are different sources of power.

Key news developments to look out for from Karnataka today

Key news developments from Telangana on May 28, 2022

The police are trying to ascertain the source of the drug and to whom it was meant to be sold.

Key news developments in Kerala on May 28, Saturday