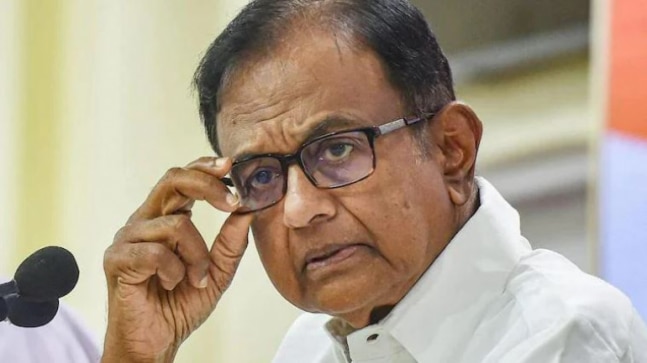 While sharing Chintan Shivir discussion details, former Union finance minister P Chidambaram said the nation’s economy is a cause of major concern and it is time to reset the policies.

Former Union finance minister P Chidambaram said the country’s economy is a major cause of concern and it is about time to reset the economic policies.

Chidambaram, who heads the panel on economy constituted by Congress president Sonia Gandhi at the party’s three-day Chintan Shivir being organised in Rajasthan’s Udaipur, was speaking at a press meet.

Sharing the minutes of the discussion, the former finance minister said a slower rate of growth has been the hallmark of the present government in the last 8 years, adding that the post-pandemic recovery has been indifferent and halting.

Chidambaram along with nine others are steering the discussion on the economy at the shivir. Their group has 60 members.On Friday, around 37 members expressed their views for over 4 hours during the event where over 400 Congressmen and women are taking part.

Chidambaram said the discussions will continue till Sunday. Speaking on inflation, he said it has risen to unacceptable levels and threatens to rise further. The country’s wholesale price index (WPI) is at 14.55 per cent and the consumer price index (CPI) is at 7.79 per cent. The former union minister said the government is fueling the rise of inflation by its wrong policies, especially through high taxes on petrol and diesel, high administered prices, and high goods and services tax rates.

Highlighting the issue of unemployment, he said the Labour Force Participation Rate (LFPR) is at a historic low of 40.38 per cent and the unemployment rate stands at 7.83 per cent.

He reiterated the charge that social services expenditure as a proportion of total expenditure has fallen to an average of 5 per cent (in 8 years) from an average of 9 per cent in the 10 years between 2004 and 2014.He said the external situation has added to the pressures on the economy. The senior Congress leader said, “The government appears clueless about the ways to deal with these developments.”

The DMK on Saturday decided to conduct Dravidian model training camps across the state to combat anti-national forces.

Bengal minister Firhad Hakim slammed UP chief minister Yogi Adityanath for his comment on the post-poll violence in West Bengal and called him UP’s Gabbar Singh.

No truth in allegations against Aryan Khan: Dilip Walse-Patil on drugs case

Commenting on the drug-on-cruise case, Maharashtra home minister Dilip Walse-Patil has said there was no truth in the allegations against Aryan Khan.

Bodies of pregnant women, 2 children among 5 found in well in Rajasthan

The bodies of three women, two of them pregnant, and two kids were recovered from a well in Dudu town of Jaipur district in Rajasthan. The in-laws of the three women, who were siblings, are suspected to have murdered them over demand for dowry.

The DGCA has imposed a penalty of Rs 5 lakh on IndiGo for failing to adequately handle the case of a special child at Ranchi airport.

Mosques built after demolishing temples are a sign of slavery: Mahatma Gandhi in 1937

In a newspaper article in the year 1937, Mahatma Gandhi purportedly wrote that mosques built after demolition of temples are a "sign of slavery". This newspaper clipping has gone viral on social media in light of the ongoing mandir-masjid row.

Will take back all 30,000 temples which were demolished, says Hindu right-wing leader in Karnataka

Pramod Muthalik, chief of Hindu right-wing group Sri Ram Sene, said on Saturday that "all 30,000 temples which were demolished" will be "taken back".

Loudspeaker row: In UP's Pilibhit, loudspeakers removed from places of worship have been donated to schools and colleges.

Four Rajya Sabha seats have become vacant in Karnataka. As a result, all three parties, the BJP, Congress and the JDS are in a rush to finalise the candidates they want to field.

Five people were injured after a wedding party was attacked for playing Kannada songs in a village in Belagavi district on the Maharashtra-Karnataka border. An FIR has been filed and police are questioning a few miscreants regarding the incident.

UP-bound SpiceJet flight returns to Mumbai after cracks on windshield

A SpiceJet flight bound to UP's Gorakhpur returned to Mumbai after it developed cracks on the windshield.

Light rains likely in Delhi in next two days: IMD

The India Meteorological Department (IMD) said on Saturday that light rainfall is likely in Delhi and NCR regions in the next two days.

Hyderabad Youth Congress staged a protest in front of Salar Jung museum over the display of VD Savarkar’s portrait.

The Indian Navy has decommissioned INS Gomati after 34 years of service.

SC wants dignity for sex workers: Where is prostitution most prevalent in India?

Following the Supreme Court's recognition of sex work as a profession, find out where prostitution is most prevalent in India.

Jacqueline Fernandez allowed to travel to Dubai for IIFA awards

Jacqueline Fernandez has been allowed by the court to travel abroad to attend IIFA.

The Bihar government announced on Saturday that it has decided to permit the exploration of the "country's largest" gold reserve found in the state.

Constable on duty thrashed by 4 men inside Lucknow police station

A constable on duty in Lucknow's PGI police station was thrashed by four drunk men after he tried to confront them for creating a ruckus inside the police station.

Two terrorists were killed in an encounter with security forces at Anantnag in Jammu and Kashmir on Saturday.