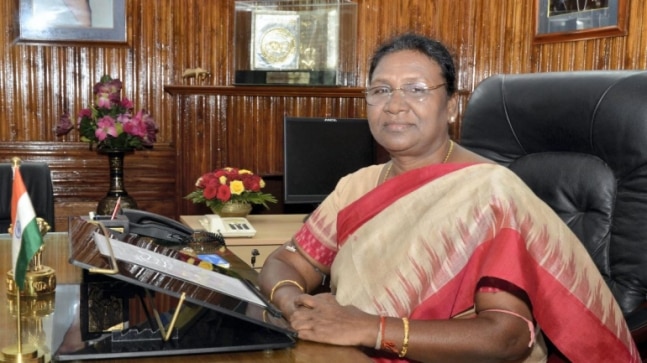 Droupadi Murmu, NDA's candidate for the presidential elections, will file her nomination today.

The BJP has invited all of their allies to join in the nomination ceremony, including Chief Ministers of NDA-ruled states, sources told ANI. Droupadi Murmu left for the Parliament from Odisha Bhawan on Friday morning to file her nomination.

Uttar Pradesh CM Yogi Adityanath arrived at Parliament ahead of the nomination.

The Delhi Assembly on Tuesday passed a censure motion against the central government's letter seeking permission to demolish 53 temples in the national capital.

A woman gave birth to a child with four arms and legs in Uttar Pradesh's Hardoi. The child has been sent to Lucknow for further medical treatment.

BJP leader Annamalai compared the 'dynasty politics' of Shiv Sena and DMK and said a rebel leader would emerge in Tamil Nadu as well.

A man strangled his wife to death in Delhi's Rohini area, after he found about her extra-marital affair.

Kerala Minister Saji Cheriyan has expressed regret over his remarks on Constitution that sparked controversy.

While granting bail to NCP youth wing member Sonia Doohan, the Magistrate court at Panaji observed that the bail application was being opposed on vague grounds.

Speaking at a conference on arbitrating Indo-UK commercial disputes in London, CJI NV Ramana said India needs a robust arbitration ecosystem to get an investor-friendly tag.

A Karnataka judge said he was threatened with transfer for remarks against an ACB official in a bribery case.

Rajasthan Congress chief Govind Singh Dotasra has sought an NIA probe into the pictures of Udaipur murder accused with the leaders of the BJP.

More than 100 million refugees in the world: Is the situation set to improve for displaced people?

The ongoing Russian invasion of Ukraine has added more misery to the spiralling global humanitarian crisis. The war has led to nearly 8.4 million people fleeing the Ukrainian border.

The shooters in the Punjabi singer Sidhu Moose Wala murder case had planned to use two women in his assassination, sources told India Today.

On June 12, VHP leader Devender Bajwa filed a complaint against a person for issuing death threats for supporting suspended BJP leader Nupur Sharma. The VHP leader has accused the police of inaction.

A petition has been filed at the Allahabad High Court requesting an archaeological dig at the Jama Masjid in Agra. The petition claims that the steps of the mosque were built over the idol of a Hindu deity.

The Khadim of Ajmer Dargah, Salman Chishti, was arrested by the police after he spoke about giving his house to anyone who beheaded former spokesperson of Bharatiya Janata Party Nupur Sharma.

Petitioner Shiv Shankar Sharma has claimed that Jharkhand CM Soren had obtained a mining lease in his name while holding the office of chief minister. In another petition, he alleged that there are several shell companies that are connected to the CM and his close aides.

The flood situation in Assam continued to improve on Tuesday although four more people, including two children, lost their lives in the deluge.

Encounter breaks out between terrorists, security forces in J&K's Kulgam

An encounter broke out between terrorists and security forces in the Hadigam area in Kulgam.

Delhi Lt Governor has instructed all departments to decongest 77 traffic corridors within the next three months.

The Aga Khan Museum apologised over the 'Kaali' poster row after the Indian High Commission urged the Canadian authorities and the event organizers to withdraw "all such provocative material".

A Mumbai court has granted pre-arrest bail to MP Navneet Rana and her MLA husband Ravi Rana in a case pertaining to obstructing the police from arresting them in the aftermath of the Hanuman Chalisa row.

Actor Kangana Ranaut told the court that Javed Akhtar threatened and insulted her after she refused to apologise to Hrithik Roshan.

Shiv Sena MP Rahul Shewale has written a letter to Uddhav Thackeray to support Droupadi Murmu for the presidential elections.