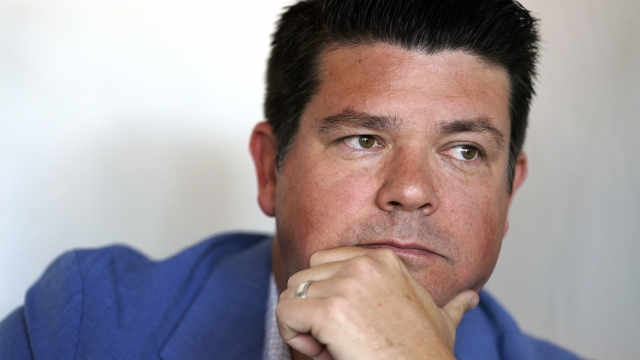 Jason Martin jumped into the gubernatorial race last year after becoming an outspoken critic of Gov. Bill Lee's handling of the virus outbreak.

Jason Martin, a Nashville doctor critical of Republican Gov. Bill Lee's hands-off approach to the COVID-19 pandemic, won the Democratic nomination for governor Friday and will face Lee in November.

Martin, a first-time political candidate, defeated Memphis attorney and City Councilman JB Smiley Jr. by a thin margin, with advocate Carnita Atwater finishing a distant third. Both Smiley and Atwater would have been the state's first Black gubernatorial nominee if either had won.

"We hear your message loud and clear. You're upset that Bill Lee has failed you," Martin said late Thursday, declaring victory before the race was called as he held a narrow lead in the vote count.

President Joe Biden and first lady Jill Biden will be joined by Kentucky Gov. Andy Beshear and his wife for a briefing on the flooding's impact.

U.S. Pledges $1 Billion In More Rockets, Other Arms For Ukraine

This is the 18th time the Pentagon has provided equipment from Defense Department stocks to Ukraine since August 2021.

His punishment is largely symbolic, as McMichael was sentenced earlier this year to life without parole in a Georgia state court for Arbery's murder.

The first trial of Adam Fox and Barry Croft Jr. ended in a mistrial in April when the jury couldn't reach a unanimous verdict against them.

Inflation Reduction Act: How It Could Impact Your Wallet

The Congressional Budget Office says the bill is likely to reduce the deficit by up to $102 billion over 10 years.

The estimated $740 billion package heads next to the House, where lawmakers are poised to deliver on President Biden's priorities.

A police officer fired at a suspect who fled the scene, but it was unclear if that person was actually shot.

United Democrats pushed the 755-page measure through the Senate on a party-line vote.

Lawmakers must remove language imposing hefty penalties on drugmakers that boost their prices beyond inflation in the private insurance market.

An eight-year prison sentence would be the longest among hundreds of Capitol riot cases.

How Reproductive Rights Were Won In Latin America

A movement called "The Green Wave" has pushed the success of the reproductive rights movement in three of Latin America's most populous countries.

Muhammed Syed of Albuquerque, New Mexico was arrested Monday after a traffic stop for the fatal shootings of four Muslim men.

Shahram Poursafi is currently wanted by the FBI on charges related to a murder-for-hire plot against the former national security adviser.

Burn pits were used in Iraq and Afghanistan to dispose of chemicals, cans, plastics, medical equipment and human waste.

Consumer prices jumped 8.5% in July compared with a year earlier, down from a 9.1% year-over-year jump in June, according to government data.

Many Republicans are expressing their outrage with the FBI's unannounced raid of Trump's Mar-A-Lago estate.

Where Do Frontline Workers Go For Help With Mental Health Challenges?

Trauma of tragedy, pandemic burnout and long hours may push physicians to need mental health treatment, but stigma keeps them from getting help.

Dozier died "peacefully" Monday at his home near Scottsdale, Arizona, according to a statement from his family.

Former Trump attorney Rudy Giuliani had been ordered to appear before a grand jury investigating possible illegal interference in the 2020 election.

None of the other 141 people on board the plane were injured in the incident, according to the National Transportation Safety Board.

Following Which States Are Spending The Most For Midterm Elections

One estimate says $8.8 billion will be spent on this year's campaigns. For perspective, $3.9 billion was spent in the last big midterm in 2018.

Former President Donald Trump said in a lengthy statement Monday that the FBI was conducting a search of his Mar-a-Lago estate.

A Chicago bakery attacked for hosting a drag brunch is now allowed to host the event again, but the journey to get there wasn't easy.