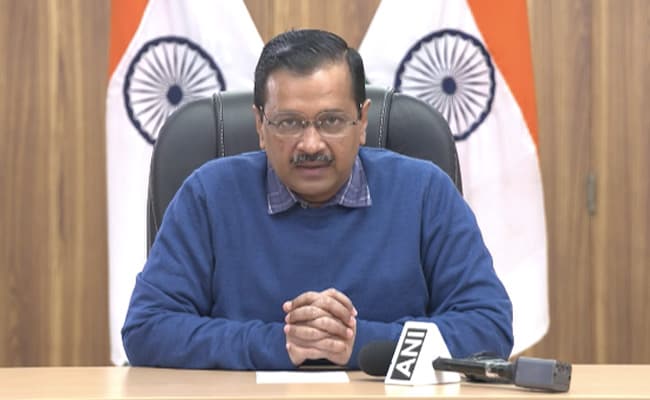 COVID-19: Delhi has also reported the second-highest cases of the highly transmissible Omicron strain after Maharashtra

Do not panic. This was the major focus of Delhi Chief Minister Arvind Kejriwal's address today as the national capital saw a sharp spike in COVID-19 cases. The city has also reported the second-highest cases of the highly transmissible Omicron strain after Maharashtra.

"COVID-19 cases are increasing rapidly in Delhi, but there is no need to panic. Currently, the active cases in the city are 6,360. Today, 3,100 new cases are expected. Only 246 hospital beds were occupied yesterday and all the cases are mild and asymptomatic," Mr Kejriwal said, adding data shows that the impact of the rise in cases is far lesser than what it was during the second wave.

"As of now, only 82 oxygen beds in hospitals are occupied. Delhi government is prepared will 37,000 beds. I just want to tell you that all new cases are with mild symptoms, asymptomatic, so there is no need to panic," the Chief Minister said.

Mr Kejriwal, however, cautioned people not to drop their guard as active cases rose from around 2,000 on December 29 to 6,000 on January 1. During this period, the number of hospitalisation fell, which is a good indication that it is not as severe as the second wave, the Chief Minister said.

The incident took place around 1.30 pm on Friday when the minor girl was taking a stroll with her boyfriend near a creek in Dombivili town of Kalyan taluka, an official said.

The India UK Achievers Honours were created to celebrate the achievements of Indian students who studied at British universities and to mark 75 years of India's independence.

"Appropriate Age For Motherhood Is 22 To 30 Years": Assam Chief Minister

Speaking at a government function here, he iterated his government's commitment to stop underage marriages and motherhood.

"Walking With Mantra To Give Preference To Underprivileged": PM Modi

He is on a visit to Bhilwara district on the 1111th incarnation festival of Lord Shri Devnarayan.

State Chief Minister Manik Saha has been nominated as a BJP candidate from Town Bordowali.

Superintendent of Police Shyam Singh said the aircraft crashed in an open field in the Ucchain area of the city.

Both the fighter jets had taken off from the Gwalior Air Force base.

"We are expecting a huge gathering, including leaders of important political parties at its culmination," he said.

He was joined by PDP chief Mehbooba Mufti, her daughter Iltija Mufti and a large number of workers from her party as the march traversed through Awantipora.

Uma Bharti said, "New liquor policy will be introduced on January 31 in the state, till then I will remain in the shelter of God."

"If you read foreign newspapers, they use words like Hindu nationalist government. In America or Europe, they won't say Christian nationalist...these adjectives are reserved for us," S Jaishankar said

Chief Minister Manik Saha will contest from Town Bardowali, the constituency he won in a by-poll last year.

Lollapalooza's arrival in Mumbai is the first time the festival has been staged in Asia after branching out from its American origins in the past decade.

Justice Kalyan Rai Surana called in the police to decourt the counsel, B K Mahajan.

BBC documentary row: Such screenings, as protest against censorship and "hiding facts" of the 2002 Gujarat riots, have been held across India

President Droupadi Murmu will attend the annual opening of the gardens Udyan Utsav on January 29. The gardens will be open to the public from January 31 to March 26.

Depressed After Breakup, Doctor Sets His Mercedes On Fire In Tamil Nadu

Police suspect the doctor was attempting to end his life as he sat inside the vehicle after putting it on fire.

Watch: Amit Shah Holds Roadshow In Karnataka Ahead Of Polls

Targeting the opposition Congress and JD(S) and accusing them of dynasty politics and corruption, Amit Shah sought support for the BJP to form a government with full majority in Karnataka.

Security Measures For Yatra Stricter Today Than On Friday: Congress

"The way the people of J-K have welcomed the yatra, it has made clear that people here have been troubled," he said.

Mughal Gardens At Delhi's Rashtrapati Bhavan Will Now Be Known As...

Spread over 15 acre, Amrit Udyan has often been portrayed as the soul of the presidential palace, the website says

As the Rahul Gandhi-led yatra continued so did the sparring on social media platforms, TV debates and on the streets.