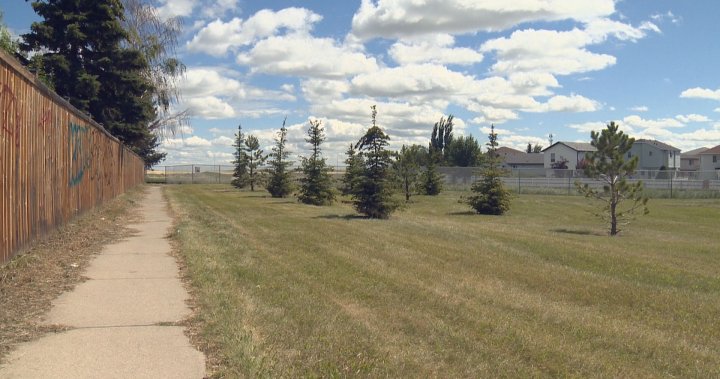 The proposal would see Memorial Drive extended from the existing communities of Abbeydale and Applewood Park, over Stoney Trail to Calgary's east city limits at 116 Street E.

The City of Calgary is exploring an extension of Memorial Drive to help accommodate new communities being developed on the city’s eastern edge. But residents are concerned an extension would eliminate green space.

The extension of the east-west thoroughfare was approved by the previous council as part of area planning for the new community of Belvedere, however the project has not been funded.

The proposed project would extend Memorial Drive from the existing communities of Abbeydale and Applewood Park to the east city limits at 116 Street E.

It would include a new crossing of the CN Rail line and an east-west overpass across Stoney Trail, without on or off ramps from Stoney Trail.

“While the plan is approved by council, the details about the configuration, lanes, sidewalks, pathways and trees accommodation is to be discussed through this functional planning study,” City of Calgary project manager Zoran Carkic told Global News.

According to Carkic, the current public engagement process will help determine how the roadway will cross through the neighbourhood, and over the CN Rail tracks, Rotary Mattamy Greenway and Stoney Trail.

The online survey will be open until August 9.

But some residents in the area aren’t keen on the plan to extend the roadway past their homes.

Pierre Poilievre preferred leader for Conservatives but not Canadians: poll

Ontario MP Pierre Poilievre remains the heavy favourite to be the next Conservative party leader but he trails opponent Jean Charest for support among Canadians as a whole.

A recent glitch in ArriveCAN that ordered more than 10,000 people to quarantine may have violated Canadians' fundamental rights, experts warn.

It has been nearly a year since the White Rock Lake wildfire swept through parts of Killiney Beach on the west side of Okanagan Lake, but life is still far from back to normal.

The Edmonton Elks on Saturday have the chance to draw closer to a playoff spot with a win over the Saskatchewan Roughriders despite a 2-6 record.

The 32-page document lists other instances that the plaintiffs alleged resulted in paddling or physical or sexual assault.

The man's body was located by the lifeguard who immediately started life-saving measures. EHS attended but the man did not survive

Court records show that debt was not paid by Oumou Kalsoum Sall and a bailiff went to her residence in Gatineau, Que., to enforce it Aug. 2.

The RCMP says it received a report on Monday around 4:45 p.m. about a swimmer in distress in the water at Last Mountain Lake, Sask.

The winning ticket was purchased at Maclaren Pharmacy on Bridge Street in Campbellford.

The Kingston, Ont., band was inducted in 2002 for their music, and is now being recognized for their humanitarian efforts.

The move comes a day after efforts to decamp the 100 block descended into chaos Tuesday, with both police and activists making allegations of assault.

A former Edmonton Stingers star has served as the inspiration for the redesign of the Canadian Elite Basketball League's trophy awarded to the league's most valuable player.

For Monte Lake resident, Dustan Eager it's a bit surreal to see a new home for his family under construction.

Connor Bedard had a goal and an assist and Canada opened its world junior hockey championship with a decisive 5-2 victory over Latvia on Wednesday.

Nathan Rourke and the B.C. Lions will get to know the Calgary Stampeders very well over the next few weeks.

As inflation brings the price of gas, groceries and utilities up, the Sask. NDP is calling for three big changes from the provincial government to help with the cost of living.

Hugo Lambert is cycling across Canada this summer in memory of his mom, to raise money for ALS research and to support others affected by the fatal disease.

The agency says 12 million girls under the age of 18 become child brides each year, forcing them to abandon school while putting their health at risk through early pregnancies.

Police in Stratford, Ont., have announced that no charges will be laid in connection to the Amber Alert which was issued for a missing 11-year-old girl last week.

'John was a bright light.... Our sincere condolences go out to John’s wife Wendy, their three boys, daughter-in-law, and grandson,' a statement from town officials said.

Waterloo Region Council's community services committee approved a motion which will direct staff to look for solutions to the burgeoning homelessness problem in the area.

Authorities in South Dakota have located two Saskatchewan children who went missing and were believed to be in the company of a convicted sex offender.

Nathan MacKinnon of the Cole Harbour Avalanche is bringing the Stanley Cup to Halifax later this month, where fans will celebrate his win with a parade in the city's downtown.