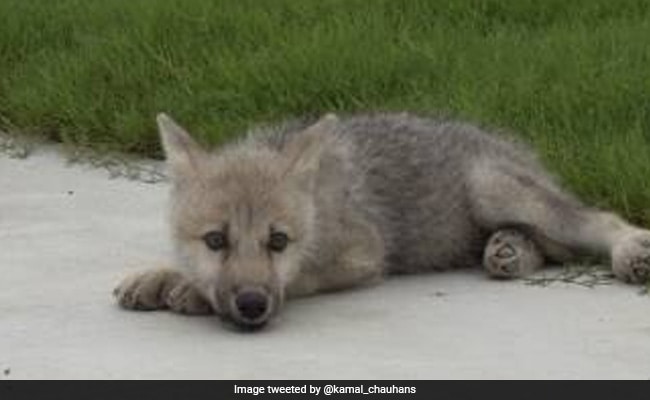 The scientists chose a Beagle dog for the cloning process as it shares genetic ancestry with arctic wolves.

Scientists in China have successfully created the world's first cloned arctic wolf. Using the latest in biotechnology, Beijing-based firm Sinogene Biotechnology Co was able to achieve the final result, which it said will help in conservation of endangered species. The firm announced the debut of the arctic wolf pup on Monday, 100 days after its birth, according to a report in Global Times. Born on June 10, the wolf named Maya, is in very good health, the outlet further said.

"To save the endangered animal, we started the research cooperation with Harbin Polarland on cloning the arctic wolf in 2020. After two years of painstaking efforts, the arctic wolf was cloned successfully. It is the first case of its kind in the world," Mi Jidong, the general manager of Sinogene Biotechnology Co, said at a press conference in Beijing.

The cloning involved creation of 137 new embryos and transfer of 85 of them to the uteri of seven beagles. One of them was born as a healthy wolf.

KEAM 2022: The first allotment list will be released today, September 21 at cee.kerala.gov.in. Candidates must confirm the allotment and submit the processing fee until September 26

The Banaras Hindu University admission registration which started today, September 20, will continue till October 3, 2022. The official website of the university is bhuonline.in and candidates can apply through the university website.

Megalodon is considered to be the largest shark that ever existed, and one of the largest fish on record.

JAC Chandigarh Mock Counselling Result 2022: JAC Chandigarh B.Tech admissions result will be available on the official website- jacchd.admissions.nic.in. Candidates can use their JAC application number and password to get the counselling result

IIM Bangalore will close the CAT 2022 registration window on September 21, 2022.

JEE Advanced 2022: Prakash Rathod bagged AIR 1 in the SC-PwD category. The other achievers are Manjaree (AIR 126) in the general-EWS category and Irfan Hussain (AIR 46) in the ST category

JEECUP Counseling 2022: The JEECUP 2022 round three seat allotment result will be released on September 19. The document verification of shortlisted candidates will be held on September 20 to 22

Evidence Indicates There's One More Planet In The Neighborhood: Study

The findings indicate that the planet is between one and three million years old and is around the size of Neptune or Saturn.

Over 2.60 Lakh Overseas Students Arrived In Australia Till July 22: Official

Over 2.60 lakh students have arrived in Australia to take up higher education soon after the country opened its borders following the impact caused by COVID-19 enforced lockdown, an official said on Saturday.

WBJEE 2022: The candidates who have been allotted seats have to report for document verification till September 29

GATE 2023 Registration To Close Soon At Gate.iitk.ac.in, Steps To Apply

GATE 2023: The candidates can apply for GATE 2023 at gate.iitk.ac.in, the closing date of the extended online application process is October 7. GATE 2023 will commence from February 4

CAT 2022: The application correction window will be opened till 5 pm tomorrow, the candidates can make changes of details such as photograph, signature and test city preferences

The scientists chose a Beagle dog for the cloning process as it shares genetic ancestry with arctic wolves.

Candidates who have qualified for the CUET UG 2022 exam can apply for the Integrated PG courses through the official website – pondiuni.edu.in.

Both Houses of the Andhra Pradesh Legislature witnessed acrimonious scenes on Wednesday as the Y S Jagan Mohan Reddy-led government brought in a Bill to rename the NTR University of Health Sciences (UHS) as YSR UHS.

NEET UG 2022: Course Options Other Than MBBS For Low Rank In NEET

The candidates who have secured low rank in NEET 2022 may opt for medical courses other than MBBS.