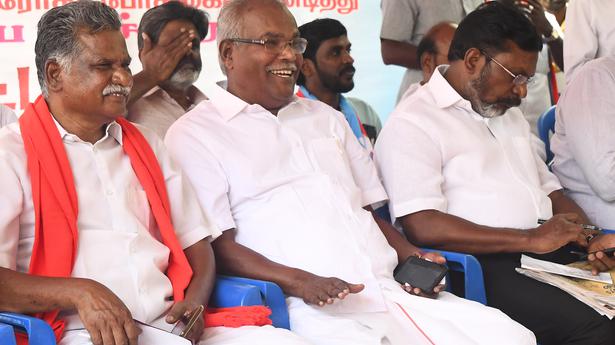 Mr. Thirumavalavan said the Left parties had started a protest movement against the economic policies because they were also one of the reasons for the rampant unemployment and economic slump.

“The economic slump and widespread unemployment existing in India is a result of Modi’s economic policies. They are the foremost and fundamental reason,” he said.

“Petrol and diesel prices have increased. The cooking fuel price also has increased. When people are ready to protest against the rise in prices, BJP is trying to put the blame on the State government in an attempt to prevent people from turning against them. Unemployment is not just a result of the pandemic but also of the wrong economic policies of the Centre,” Mr. Thirumavalavan said.

He said the VCK would always hold hands with the Left parties in every issue. “The decision to protest with the Left parties is not to be construed as an effort to form a separate front against the DMK or Congress or MDMK or MMK or IUML. We will never take such a decision as it would only be an advantage to BJP and Sangh Parivar,” he said.

According to him, the DMK alliance is a strong opposition to the BJP, unlike anywhere in India.