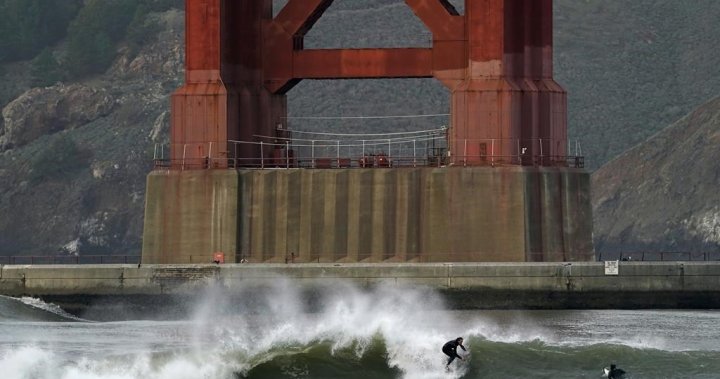 Forecasters warned that northern and Central California was still in the path of a "relentless parade of cyclones" on Sunday, promising little relief for the region.

Torrential downpours and damaging winds had left hundreds of thousands of homes and businesses without power in California on Sunday after a deadly week of weather, and the state was still bracing for more heavy rain and snow to fall through Tuesday.

Forecasters warned that northern and Central California was still in the path of a “relentless parade of cyclones” on Sunday, promising little relief for the region.

Two overlapping phenomena – an immense airborne stream of dense moisture from the ocean called an atmospheric river and a sprawling, hurricane-force low-pressure system known as a bomb cyclone – have caused devastating flooding and record snowfall over the past week. The latest storms vividly illustrated the consequences of warmer sea and air temperatures caused by climate change.

At least six people have died from weather-related incidents in California since New Year’s weekend, including a toddler killed by a fallen redwood tree crushing a mobile home in northern California.

More than 460,000 homes were still without power in California as of Sunday morning, according to data from PowerOutage.us.

“The West Coast remains under the target of a relentless parade of cyclones that form and intensify over the Pacific Ocean,” the National Weather Service (NWS) said in a Sunday morning forecast.

In the last week, severe weather spawned violent wind gusts that toppled semi-trucks, flooded the streets of small towns along northern California’s coast and churned up storm surge that destroyed a pier in the beach city of Santa Cruz.

The heavy rain and snow have already caused significant flooding and ground saturation, meaning the next storm to move through early this week would bring an additional flood threat, the NWS said.

Is Canada’s military ready for the challenges ahead? ‘No,’ says defence chief

WHO to decide if COVID remains an emergency. What will this mean for Canada?

As the WHO mulls whether COVID-19 remains an emergency, some health experts say COVID is still a public health threat and measures to combat it in Canada should continue.

The attack, which police described as a "terrorist incident," underlined fears of an escalation in violence after months of clashes in the West Bank.

Moscow said in a 2021 submission to the UN that it wanted much more Arctic seabed, a move that has implications for Canada and Denmark who have their own claims.

Poland donating 60 modernized tanks to Ukraine in addition to Leopards

Poland, which has positioned itself as one of Kyiv's staunchest allies, pressed hard for Germany to send Leopard 2 tanks to Ukraine and to allow other countries to do so as well.

The rocket launches from Gaza marked the first such attack from the militant Hamas-ruled territory since Prime Minister Benjamin Netanyahu returned to power.

Family from France desperate to stay in Calgary, fears for lives if deported

Members of a family living in Calgary are in a desperate race against time to find a skilled job. They are facing deportation unless their temporary work permit can be renewed.

U.S. Secretary of State to visit Middle East as concerns over violence escalate

Secretary of State Antony Blinken will travel to Egypt, Israel and the West Bank this weekend, the State Department announced Thursday.

National Defence Minister Anita Anand made the commitment on Thursday, ending the debate over whether Canada would ship over battle tanks from its military stockpile to Ukraine.

An arrest warrant had already been issued for Arthur E., who was brought before a judge of Germany's top criminal court on Monday and remanded in custody, the statement added.

Haiti’s UN envoy says she heard ‘caution,’ not ‘no’ from Canada, U.S. over intervention

Helen La Lime expressed hope that the U.N. Security Council will deal positively with the issue of the force requested by the Haitian government to deal with a growing gang crisis.

Since winning the western pledge for tanks after months of lobbying, Kyiv has pressed on with further requests for arms, including calls for jet fighters such as U.S. F-16s

The International Monetary Fund now expects the world economy to grow 2.9 per cent this year thanks to China dropping its zero-tolerance COVID-19 measures.

The judge says courts can only rule on whether the government is following existing laws and policies, instead of delving into global agreements.

Will ChatGPT take your job? New program shows AI could be ‘competing’ for work: experts

Despite its growing popularity, ChatGPT still has several flaws that mean it won't be replacing humans in the workforce -- right away.

Former British prime minister Johnson, speaking to the BBC for a documentary, said the Russian leader had threatened him with a missile strike that would "only take a minute."

General Mike Minihan, who heads the Air Mobility Command, wrote to the leadership of its roughly 110,000 members, saying, "My gut tells me we will fight in 2025."

The government says the reform is necessary to keep the pension system solvent as France's life expectancy has grown and birth rates have declined.

The Turkish foreign ministry urged its citizens to take precautions and stay away from demonstration areas and go to local authorities if they face xenophobic or racist attacks.

Some protests escalated as demonstrators armed with rocks and makeshift shields clashed with police, who deployed gas and rubber bullets.

Pakistan has witnessed similar incidents in the past as tourist attractions do not adhere to safety measures, including the use of life vests.

Trudeau says people have the right to protest, while Ottawa police have vowed that they don't want a repeat of last year's events.

Ukraine war: ‘Fast-track’ talks between Kyiv and the West underway for missiles, planes

Mykhailo Podolyak, an adviser to Ukrainian President Volodymyr Zelenskyy, said Ukraine's supporters in the West "understand how the war is developing."

Former President Donald Trump is set to kick off his 2024 White House bid on Saturday with visits to a pair of early-voting states.

The shooting in the Palestinian neighborhood of Silwan in east Jerusalem, near the historic Old City, wounded a father and son, ages 47 and 23, paramedics said.