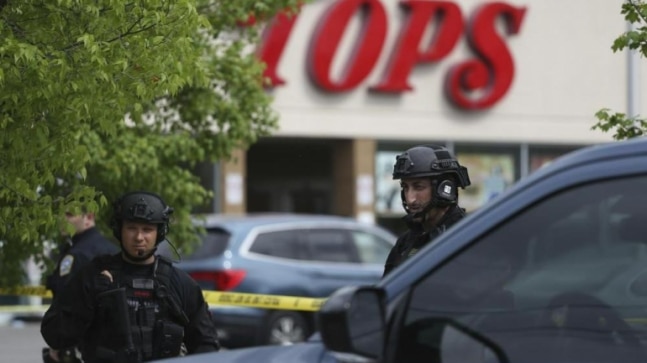 At least 10 people were killed after a man opened fire at a supermarket in Buffalo, New York on Saturday.

A gunman wearing military-style clothing and body armor opened fire with a rifle at a supermarket in Buffalo, New York, killing at least 10 people before being taken into custody Saturday afternoon, law enforcement officials told The Associated Press.

Details on the number of additional people shot at the Tops Friendly Market and their conditions weren’t immediately available. The two officials were not permitted to speak publicly on the matter and did so on the condition of anonymity.

Investigators believe the gunman may have been streaming the shooting through a camera affixed to his helmet, one of the officials said. The video showed the gunman, dressed in military gear, pulling up to the front of the store with a rifle on the front seat and then pointing the rifle at people in the parking lot as he exited the vehicle and opening fire, the official said.

It also shows the suspect walking into the supermarket and shooting several other victims inside, the official said. One of the victims was a recently retired police officer who was working as a security guard at the store, according to the official.

One of the officials cautioned the investigation was in its preliminary stages and that authorities hadn’t yet discerned a clear motive, but were investigating whether the shooting was racially motivated.

The supermarket is in a predominately black neighborhood, about 3 miles (5 kilometers) north of downtown Buffalo. The surrounding area is primarily residential, with a Family Dollar store and fire station near the store.

A video of a Brazilian man being asphyxiated with gas in the trunk of a police car went viral. Brazil's federal police said in a statement that they had opened an inquiry to investigate the circumstances of the death.

Parrot’s adorable conversation with his ‘maa’ is the best thing on the Internet today. Watch video

A video that has gone viral on social media features a parrot. It can be heard referring to its hooman has 'mummy'.

Puppy distracts little girl and steals her candy in viral video. This is what happened next

A video of a puppy and a little girl has gone viral on social media. In the video, the puppy can be seen distracting the kid and stealing her candy.

11 babies killed in fire at neonatal unit in Senegalese Hospital

As many as 11 babies died after the neonatal unit in Senegalese Hospital caught fire on Wednesday. Only three infants could be saved, revealed President Macky Sall.

Wordle 342 word of the day, May 27. This jewelled ornamental band is worn by both noble men and women

Were you able to solve Wordle 341? In case you haven't, we have got you covered. Check out Wordle 341 answer here.

China and Russia vetoed a UN resolution that would have imposed new sanctions on North Korea.

An IAS couple has been transferred to Ladakh and Arunachal Pradesh respectively for allegedly walking their dog in a state-run stadium. But with both its owners now posted at opposite ends of the country, where will the dog go, netizens wondered.

The Texas school gun attack is another shameful event which will haunt America, a country that has repeatedly failed to protect school kids from easily avoidable deaths.

Western allies are considering allowing Russian oligarchs to buy their way out of sanctions and use that money to rebuild war-torn Ukraine.

An explosion at a biodiesel plant in Spain killed two people on Thursday. Authorities evacuated 250 kids from the area.

China said on Friday that it actively supports Russia's move to expand the BRICS bloc.

In an exclusive interview with India Today TV, Fareed Zakaria spoke about the slowdown of China’s economy and the concerns surrounding the rising tensions in the country. Fareed Zakaria noted that India is well poised to take advantage of the slowdown in the Chinese economy.

Born on 28 March, 2000, Pebbles is 22 years and 59 days old and the new Guinness World Record holder for the oldest living dog.

Moscow turned out to be very bad at cyber: Fareed Zakaria on Russia-Ukraine war

Indian-American journalist Fareed Zakaria said that Ukrainians jammed all Russian cyber efforts and the Russians turned out to be very bad at cyber.

Ayla Summer Mucha was born to Cristina Vercher and Blaize Mucha in South Australia. But after her birth, her parents were surprised at her rare condition.

IAS officer Awanish Sharan posted a picture of 10-year-old Seema in her school uniform and wearing her new prosthetic leg.

Dancing dad Ricky Pond grooved to the trending Coke Studio song Pasoori in a video that has gone viral online.

As Pride nears, Spain's LGBTQ community is worried that the spread of monkeypox can increase the homophobic sentiment based on misunderstandings of the disease.

Little girl's reaction as she meets her friend after a very long time is every BFF ever. Relatable much?

A video that has gone viral on social media features a little girl hugging her best friend whom she met after a very long time. The video has sover 1 million views.

The original video was shot at Santa Barbara Zoo in California, US in 2020. It shows an adorable giraffe family.

Parents of a survivor from the Texas school shooting said she smeared blood on herself to play dead and escape the shooter.

Zomato's post on meeting deadlines has the Internet crying for the good old days. Viral, obviously

Zomato talked about meeting deadlines and cooker ki seeti in an Instagram post that has gone viral online.

200 confirmed cases of monkeypox across 20 countries: WHO

Health authorities in Europe, North America, Israel and Australia have identified more than 150 cases of monkeypox in recent days.

Students of a school in China's Shimian County helped a specially-abled classmate to evacuate during an earthquake in a video that has surfaced online.