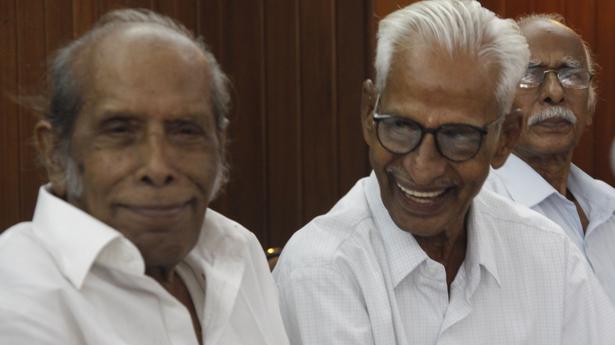 Age has not withered his creative spirit, as cartoonist Sukumar celebrates his ‘navathi’ on July 6, Wednesday.

As this correspondent called up to wish him on the eve of his 90th birthday, it was his daughter Suma who said that he was in the midst of completing a drawing. The navathi celebrations will be held at his residence at Padamugal near Palachuvadu here in the company of his family members and well-wishers.

A few ailments had forced him to stay indoors, though he remains active by watching television and reading newspapers. “Laughter is the best medicine to remove your worries, and I have been trying to prescribe it to many over these years,” he said when asked to recall his journey of yesteryears.

“Everybody should look back when they reach a point of life to analyse the actions of the past. Looking back, I am satisfied, as I have done nothing wrong to anyone while managing to bring a smile on the faces of several people,” he said.

The veteran political cartoonist and satirist had shifted to Kochi after a long stint in Thiruvananthapuram after his wife’s health condition had deteriorated in 2019. Though he says that the humour in his veins has slowed down after his wife’s death, it just takes a moment before he ignites laughter among his listeners. “Like the Lord Krishna evokes different feelings among his gopikas, I am Sukumaran Potti for some and Sukumarji for others. Some people even call me ‘vaidhyan’ thinking that I am an Ayurvedic physician,” he said.

Born in 1932 at Attingal, S. Sukumaran Potti aka Sukumar started drawing cartoons from his childhood.  His first cartoon was published in Vikadan magazine in 1950. He joined the police department in 1957 and retired as administrative assistant in the Crime Investigation department at the State Police headquarters in Thiruvananthapuram in 1987.

Renowned cartoonist K. Shankar Pillai was his teacher in political cartooning. Author of nearly 50 books, including Keralathinte Cartoon Charithram, Sukumar is the recipient of the Kerala Sahithya Academy Award. He served as president of Narma Kairali and chairman of the Kerala Cartoon Academy.