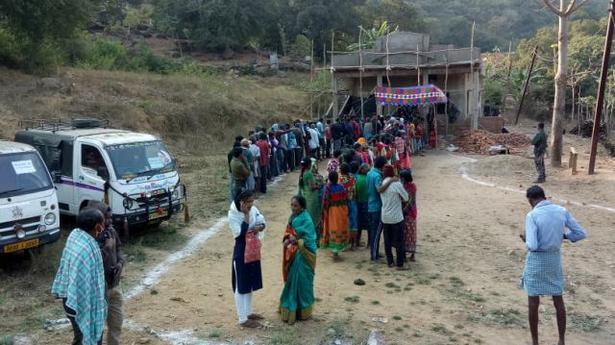 The Andhra Pradesh government on Saturday held panchayat elections in Kotia gram panchayat of Odisha despite Koraput Collector warning his Vizianagaram counterpart not to go ahead. Police and revenue department officials from Andhra Pradesh were deployed in Kotia gram panchayat as villagers stepped out to cast their votes early in the morning. Voting slips were also distributed among voters and vehicles were sent to transport voters to polling booths.

Known for films such as ‘Life in a... Metro’, ‘Barfi!’, and ‘Ludo’, Anurag Basu said stories of unsung heroes like Ravindra Kaushik’s must be shared with people

Apart from a PMLA case against him, Rajesh Joshi is also allegedly involved in the diversion of 'kickbacks' for the Goa assembly polls of last year .

Season three, currently under production, will see Tamar reeling from the loss of her closest allies and looking for a way to reinvent herself

The company announced the launch of its first product in four South Indian States — Gemini Pureit, a sunflower oil

Scrutiny of nominations, received from January 31 to February 7, began at 11 a.m. Returning officer Sivakumar says the deadline for withdrawal of papers is 3 p.m. on February 10

AU has no role in it and now the ball is in the State Government’s court, says a professor

The former NSE managing director, who was earlier arrested by the CBI in the alleged NSE co-location scam, was arrested in the money-laundering case by the Enforcement Directorate on July 14 last year.