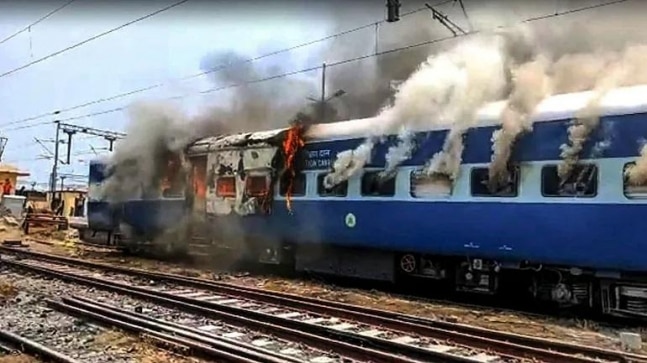 Railway properties have been vandalised, torched or attacked from Bihar to West Bengal amid the protests against the Agnipath Scheme. Indian Railways has incurred huge losses in terms of property damage and refund for ticket cancellations.

Amid the mass protests in several parts of the country against the recently launched Agnipath Scheme, railway properties have been vandalised, torched or attacked from Bihar to Telangana. Indian Railways has so far incurred losses of over Rs 1,000 crore, including damage and reimbursement to passengers for ticket cancellations in the past few days.

The protesters damaged railway property and torched dozens of trains. Earlier on June 18, the Railways had stated that it had suffered a loss of more than Rs 700 crore in just four days of protests. Furthermore, according to railway officials, more than 60 crore passenger tickets have been cancelled.

The railway has not incurred as much property damage in a decade as it has incurred in the past few days. So far, Indian Railways has suffered losses that are higher than the total losses incurred during the last decade.

As per the officials, building one general coach costs Rs 80 lakh, while a sleeper coach and an AC coach cost Rs 1.25 crore and Rs 3.5 crore per unit, respectively. To build one rail engine the government has to spend upwards of Rs 20 crore. The 12-coach passenger train costs over Rs 40 crore and the 24-coach train costs upwards of Rs 70 crore.

Whether it is a protest or a movement in the country, railway properties are often subjected to destruction. Earlier in January this year, candidates had protested against the results of the RRB-NTPC exam.

The Vistara flight, which originated from Bangkok, was uneventful and landed on runway 10 at Delhi.

Mukhtar Abbas Naqvi is a prominent Muslim face of the ruling BJP at the Centre.

The Madhya Pradesh Police registered an FIR against TMC MP Mahua Moitra over her remarks on Goddess Kaali.

A 27-year-old woman died due to medical negligence while under surgery in the same Palakkad hospital where a mother and her newborn infant died on July 4. Kerala health minister, Veena George, has ordered officials to take action as per the Clinical Establishment Act.

2 more arrested for looting, killing Sikhs in Kanpur in 1984

In 1984, following the assassination of then Prime Minister Indira Gandhi, the accused allegedly killed Sikhs in Kanpur after looting them, officials told India Today TV.

Mumbai court sentences man to 1.7 years in jail for abusing policemen who woke him up

The Mumbai sessions court sentenced a man to 1.7 years in jail for abusing policemen who woke him up when he was sleeping on a platform in Chhatrapati Shivaji Maharaj Terminus. He had also used criminal force and pushed one of the police officials.

The Comptroller and Auditor General (CAG) today bashed the Delhi Government for high spending on advertisements.

Income tax officials are raiding the house and office of AIADMK member, Chandrashekar, who is the publisher of the party’s mouthpiece, Namadhu Amma. The raids are underway in Coimbatore’s Vadavalli area, where his home and office are located.

The function will be attended by close family members and relatives. The CM will get married at his official residence.

A compound wall of Mangalore Institute of Technology and Engineering collapsed due to heavy rainfall in Dakshina Kannada district, damaging three parked cars. No casualties were reported in the incident.

A 40-year-old man was arrested for allegedly sexually harassing a woman at Jor Bagh metro station.

Police on Wednesday removed a wedding banner with the image of Lord Shiva in Tamil Nadu's Kanyakumari. Here's why.

Farhan Solanki was hospitalized due to an alleged overdose of sleeping pills. Farhan's family claimed that he was in depression after his in-laws demanded Rs 2.5 crore for settling the triple talaq case.

The dispute between the Edappadi K Palaniswami (EPS) and O Panneerselvam (OPS) factions could be resolved in the General Council of the party or in the civil suit pending before the high court, the top court noted.

Why temples offer fish, meat to Goddess Kali in Bengal

There are hundreds of Kali temples across Bengal and innumerable legends associated with each one of them. But there are some consistent rituals that form the core of Kali worship in the eastern state.

Agra Police has busted an extortion racket and arrested four people, including a woman and three lawyers.

Wrestler died by suicide by consuming poison in Delhi

A 25-year-old wrestler allegedly committed suicide by consuming poison in Delhi’s Bindapur area and uploaded a video on social media citing family issues as the reason, police said on Wednesday.

BJP leader Suvendu Adhikari on Wednesday demanded an apology from TMC MP Mahua Moitra for her comments on Goddess Kali.

A question about the Centre's Tiranga campaign annoyed Farooq Abdullah, who retorted: "Keep it in your homes."

Punjab Chief Minister Bhagwant Mann is all set to get married to Gurpreet Kaur in a private ceremony at his official residence tomorrow. Read on to know more about the chief minister’s wife-to-be.

PFI activist held in Telangana for involvement in 'anti-national' activities

The CPIM leader had claimed that the Constitution’s “aim is to exploit the common man”.